My 13-year-old Airedale Hayley had been gradually deteriorating and we thought had a stroke but had vestibular.
Fortunately, she recovered from that but was sleeping almost all the time and not joining in the activity with
my other dogs. She was also putting the brakes on after a very short walk.

She liked the idea of a walk but only a very short one before she wanted to turn around back to home. Her appetite had also taken a downturn.
We started adding PRO DOG REVIVE to her food and gradually noticed an improvement. She was eating her food more readily
and much more willing to go for a longer walk.

We would smile to ourselves as we noticed her doing something that she used to do and had not done recently.
One day we were surprised to see her almost push one of the others out of the way to get to their food. She is still an old dog, nothing can change that but we feel that since giving her the revive it has helped to instil some new life into her and will continue to add this product to her food. 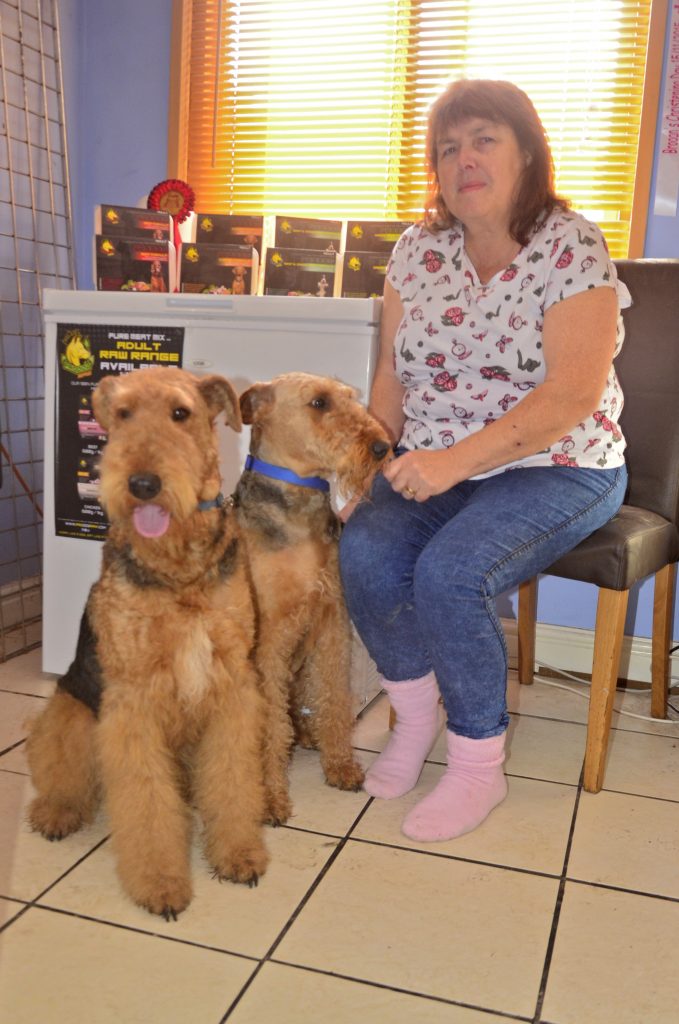 The switch to PRO DOG RAW

We have 4 Airedales from 2.5years up to 13 years.
I have always added some meat to their dry food but was not consistent with what it was. So it depended on the shop I was in although I did feed a high-quality kibble. I had thought about raw food over the years but wasn’t sure about the convenience.
My 13 year old had got to the stage where she was not fussed about eating and it was a struggle and she had been losing weight, particularly after an illness.

My middle 2 were overweight and my youngest was very hyperactive.
We decided to give PRODOG raw a try. The results have been amazing in many respects.
First of all, we have found they are all queuing up while we prepare the food and have to supervise so they don’t try and get each other.

They enjoyed it so much we had to slow them down a bit!
Our eldest has put on weight which she needed and we have managed to get some weight off the middle 2. Not entirely sure that it has helped with Gracie’s energy levels for Gracie but then she is only a baby really.

All in all, we have enjoyed seeing the dogs enjoy their food and never any danger of anything being left behind and to boot it has achieved some of the results that were needed.
As far as convenience is concerned, there was no need to worry as it has everything they need and we can simply defrost and serve.

We have been breeding and showing Airedales for a number of years and had 1st place at many shows but never before at Crufts. We had a number
of 3rd in class.
In 2017 we were showing Gracie – Hazenaide Ribbon Business – in the Post Graduate Bitch Class. You never know what is going to happen when
entering the ring. We were thrilled when Gracie was picked out for 1st place and over the moon to collect our red rosette!